Steam-FX3-Only!! Only the purchased steam version of Zen Studio FX3 will work and you MUST have/ask Zen Studios for a free “Cabinet CODE” so that you can use FX3 with multiple monitors like this.

Most common issue: Most people cannot use FX3 in Exclusive Screen Mode. Many people found that VLC media will be crashed when returning from FX3/2. The easy solution is to setup FX3 in its video settings to use “Borderless Windows”.

Also, you must run the your steam-client on windows startup (the default behaviour). You do not want to run steam for the first time from launch script.

NOTE: this is NO SUPPORT or help with any of this if you are using a PIRATED version of Zen FX3. Don't be silly and support Zen with their pinball software (well worth it, during steam sales you can get all the tables at great prices). Also, doflinx and dmdext will NOT work correctly with pirated copies. 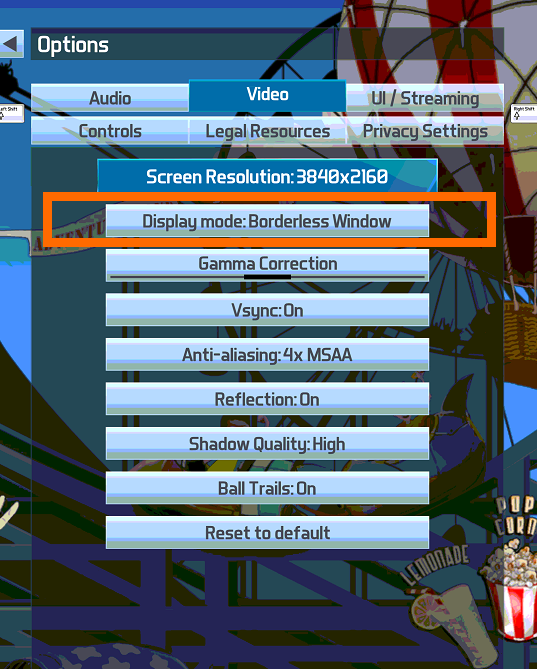 Watch my FX3 video as it will get you up and running quickly.

You will need to use this file for quick importing of all tables/info : https://www.nailbuster.com/pup/NB2_Export_Pinball%20FX3.zip

Setting up your DMD LCD OR REALDMD


In FX3 cabinet settings you must set your DMD size to 520 width and 136 height. THIS MUST BE DONE IN FX3 SETTINGS (not pinup), and setting must be 520×136 no other resolutions.
Position the FX3 DMD behind your playfield OR try putting it on the same screen as the DMD …. 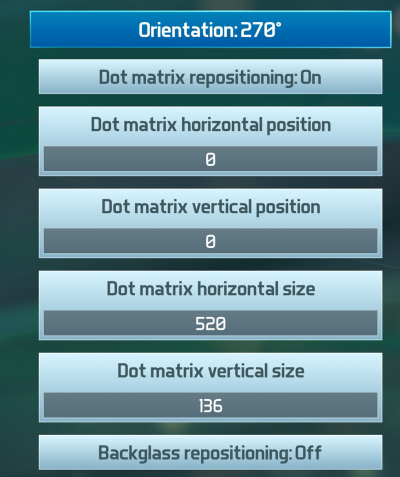 After you have it Working go In FX3 Options Under UI/streaming set Dot matrix size : to off

No longer need to run DMDEXT.EXE so you can remove that line completely.
This will be using Freezy DmdDevice.dll and DmdDevice.ini files just like visual pinball.
Here's sample FX3 pupdmd Launch script section, this will work for either real or lcd dmds.: you may need to change the first few lines to your vpinmame location. FX3 With PUPDMDControl

Note: if you get a message about “pupdmdcontrol.exe NOT FOUND” then change the folder (remove the %PopperInstDir%) manually like this. For example:

If you are using Real DMD (PinDMDv3) you may need to move this section to bottom with a timeout Line before running pupdmdcontrol.exe like this

You don't need to add anything more in your close script as the driver should close once FX3 is closed. my close script:

NOTE: For pindmdv3 real dmd users you may need to make your close script like this if you experience issues with dmd returning from fx3. 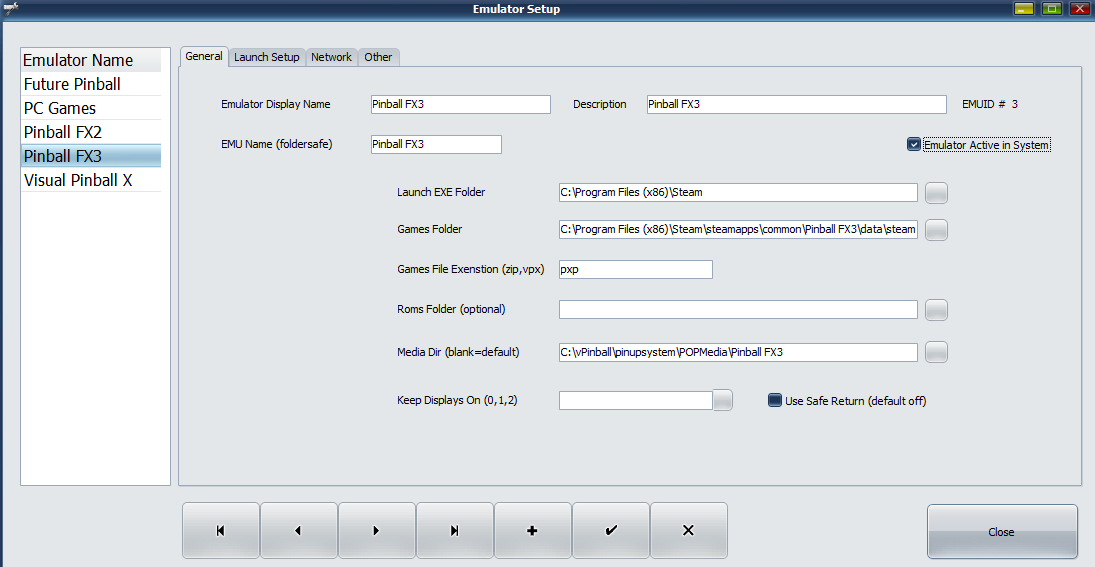 You must change the GamesFolder or Launch EXE Folder if they are different on your PC.

You can use the normal media manager in Popper to grab media or because all fx3 share common filenames and cabinet views you can grab a full media pack and drop manually into the fx3 folders to get started.

Here is a list of authors who have made available their packs:

For Information on Adding Multiplayer to FX3

This is already done for you in default Baller and newer installs. For older Popper installs see here.

Annoying "would you like to continue or start new game FX3 prompt?"

FX doesn't have an option to disable that prompt to continue or start new game…so I made a 'workaround' that should work.

you may need to change the 15 (thats seconds) if your system is slower to launch.

this will send keystrokes to 'start new game' always.

Note: this should work fine for default keyboard setup in fx3, if yours is different then don't use this workaround…

If you have problems with the videos triggering When using PuPDMD
Try copying these modified pupcapture images to the pupcapture folder in the pup-pack.

Volume 6 and 'wacky' DMD letters not working on new tables

With Volume 6 pack tables their DMDs are italic and cause issues for pupdmd and others. Ive made a workaround attempt using the following update: https://nailbuster.com/pupupdatesv14/PUPDMD_FX3_vol6_update.zip

Use the readme.txt file inside zip to get those working. NOTE: this is for LCD PUPDMD users only!!!

To use puppacks with the new scaling version of dmddevice.dll you will need to open up dmddevice.ini in your vpinmame folder and add the following to it to ensure scaletohd=false on any fx3 puppacks you use.

TableName are not obvious to which ones they are based on Filename.

For anyone else who has trouble with the naming on some of the Zen/FX3 tables, here you go:

Launching "Mars" table will launch "Attack from Mars" instead.

There's a known bug IN Zen FX3….(NOT in PinUP). If you use command line to launch mars, it will launch the wrong game. Easy solution is to make a copy of MARS.PXP file (in FX3 app folder) and call it NARS.PXP. Then add NARS.PXP to Popper like a normal game and set the media for it (remember to 'hide' MARS.PXP file in games manager).